Thank you so much for hosting me today.

Born and raised in Bucharest, Romania, I had a childhood and upbringing different from what most people outside the country are accustomed to. Since an early age, I loved to read. Growing up in a communist country, where all information was closely supervised, I soon ran out of book to read.

I had to start of course with the literature mandatory in school, all Romanian authors, but soon, I started to borrow books from my parents’ collection. When most people hear ‘Black Market’ they think of illegal merchandise. For us, was also books. Coming across translated international authors, wasn’t easy, but not impossible either.

It was when I fell in love with ‘The Three Musketeers’ by Alexander Dumas, the first romance book I ever read. I was only in my early to teens, so extremely impressionable. Until today I still believe everyone should have at least one sword, even if only for decorative purposes.

When I attempted to read ‘War and Peace’ by Fyodor Dostoyevsky, I failed miserably, falling asleep before finishing a whole page. I still didn’t get the courage to go back and try to read what at that time, for me, was the most boring book, so I never made it past the first chapter. It served as a good paperweight, and many times I used it to hide underneath another book, usually something frowned upon, like ‘Gone with the Wind’ by Margaret Mitchell.

Around the same time, I managed to put my greedy hands on translated adaptations of Shakespeare’s plays, whose themes are still successfully rehashed today.

One of my best finds has to be Greek Mythology Adaptations. Those gods are still inspiring.

By the time I was sixteen, I ran out of books to devour, and started to make my own stories. In school and at home, I was busy creating worlds and characters in my head. The visit at Dracula’s Castle uncovered infinite possibilities. Our ordinary world had become that day less important than my fantasy one. You can only imagine the new level of commotion in my mind. It was the first time I knew what I wanted to do in my life: be an author.

With my first job, life started to interfere with my dreams of writing. Living though the revolution that ended the communism in Romania, brought hope. Unfortunately, the bitter taste of disappointment with the new life, convinced me to leave behind everything I knew. Only months before my twenty-ninth birthday I emigrated to Canada, in a search of a better life.

As an immigrant, I had an allowance of two large travel bags, each no heavier than forty kilograms (or eighty pounds), so I packed my life in those and started new. I still have my fifteen large notebooks, handwritten in Romanian with my first stories. They took half of one of my allowed bags, my most precious possessions.

Year after year, I drifted further and further from my dreams. With bills to pay and life in general happening every minute of the day, I had to stay focused on my sales/marketing career.

When I thought life couldn’t surprise me anymore, it did. I divorced and years later, remarried. Following my husband meant yet another big move, this time to the United States of America, my new home. He encouraged me to revisit my dream, give writing a second chance, and so I did.

New challenges rose, but I was determined not to let anything stand between me and my dream this time. Not even writing in a language that is not my native couldn’t stop me. It took me seventeen years to even dare consider it. English is not even my second language, but my fourth. I was fluent in Spanish at nineteen, and in French at thirty. With time I lost the ability to speak any of the two, but I still can understand some.

If you ever look for a challenge to test your courage and drive, try it. Pick the best language you speak, other than your first, and write a novel. Let me know how that works out. No, really, let me know. If you think having an accent is bad, wait until you have to figure out grammar. Thank God, the accent doesn’t come through in writing.

Many people start new chapters at some point in their lives. For some, the change is major, for others not so much. For me, it was monumental. All three times.

So here I stand today, humbled and grateful for everything I went through. I carry the scars of my battles, and the sweet memories of my victories. Every adventure and step I took brought me where I am today.

I’ve learned to never lose hope. It took me over thirty years to live the dream I had as a teenager. It is never too late to reach that dream you have. Hold on to it. Foster it’s growth, and above all else, never give up. Second chances happen when you least expect it. 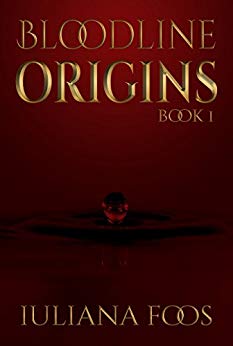 Iuliana – thank you for sharing your story. It’s always heartwarming to hear a story of challenges overcome!  Much luck on your book.